How to enter the Unlocking Code for a Nokia Model phone

1. Insert your new non accepted SIM card.
2. The phone will now show the following message:
3. 'This sim card can only be used on specific networks. Contact your customer service center for the unlock code'
( It will also display how many attempts remain ).
3. Press the 'Enter Pin Button' and enter the unlock code we sent you to unlock your phone.

3. The phone will show 'SIM Restriction Off' and will be unlocked.

Note: your unlock code is normally 15 digits long, sometimes you may get 2 codes for your nokia BB5 phone,
if this is the case the second code should be entered as # P W + CODE + 1 # just like the first code ( CODE being the unlocking code )

IMPORTANT TIP ONLY FOR UK ORANGE LOCKED NOKIA
Some Orange UK Nokia codes may fail, if this is the case use +7# instead of +1# for the code to work

1. Insert a SIM Card not from the original network (IE one it's not locked to)
2. Turn on the handset - Undo request will display, press undo if prompted. (your phone may display "sim not recognised" if this is the case just start entering your code as in step3)
3. Enter the unlocking code # p w + CODE + 1 # ( CODE being the unlocking code )
4. The phone will now unlock.

A lot of Nokia BB5 models require that you force the code to unlock it.
We are noticing this error problem more and more with newer Nokia BB5 phones, even if no attempts have been used on the phone.
Also, if your Nokia phone has had too many wrong attempts (3 + Attempts) using wrong unlock code from unreliable source, then your phone will display one of the following: "Not Allowed" or "Cannot undo restriction". If you have this problem, then use the force code method below

How To Force Nokia BB5 Code

1. Download this program SendCodeUsb.exe (Don't run it just yet.)
2. Download and Install the latest Nokia PC Suite (This installs the phone drivers)
3. Connect your phone to the PC and select PC Suite on your phone screen, then wait for all the drivers to install.
4. Run the 'SendCodeUsb.exe' program.
5. Click the 'Read Phone Info' button to check the connection, you will also see some info about your phone.
6. Tick the 'Check for FBus' option.
7. Enter the unlocking code supplied into the 'Unlock Code (15 digits)' box. NOTE: only enter the middle numbers part
EG if your code is #pw+418636523456123+1#, then just enter 418636523456123
8. Next, select the Lock 'Level (1-7)'. this should be set at 1.
9. Finally Click the 'Send Unlock Code' button to send the code to the phone and unlock it.
Here's a view of the program running and connected: 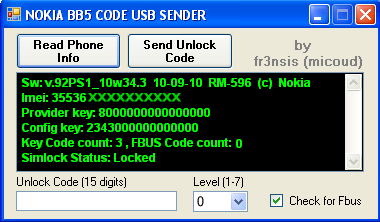 
Also Note: Some newer Nokia models like X3-02 and others cannot have their code forced by the software in the video above.
So you need to reset the key counter back to zero first using this alternative Nokia Key Counter Reset Software, then enter your code manually via the phones keypad in the normal way

If the above method fails try inserting a locked SIM (IE one that the phone will not accept) and try the unlock code again.

Firstly Double check the code you ordered by comparing the IMEI submitted with the one on your phone (Type *#06#) if it is different. Also double check that you requested the correct network that the phone is currently locked to.